“Environment has always been an inspiration, and Downeast Maine stands out as a beautiful gothic setting. For me, it is ‘Transylvania by the sea.’”

Marcus LiBrizzi’s book Lost Atusville was ranked among the top three books on race by The New Republic and was mentioned in the online editorial page of The New York Times. His book Dark Woods, Chill Waters inspired an ABC TV Extreme Make-Over—Home Edition episode in Milbridge, Maine, as well as a Weather Channel American Supernatural episode in Black’s Woods in Franklin, Maine. The Nelly Butler Hauntings was featured in a PBS/New England Folklore documentary. Additional publications include short stories, flash fiction, and poetry. As Managing Editor of the Library of Early Maine Literature, an imprint of the University of Maine at Machias Press, he collaborates to produce critical editions of rare and important books about Maine. 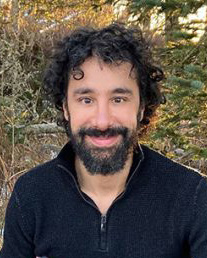