Bio: Tora Johnson has taught marine, environmental, and geographic information systems (GIS) at the college level since 1996. She teaches GIS and environmental studies at UMM and serves as director of the GIS Laboratory and Service Center and as chair of the Environmental and Biological Sciences Division. Before her son was born in 1996, Tora made a career of teaching and crewing aboard several of the large sailing vessels that ply the coast of New England, as well as commercial fishing in Alaska.

Dr. Johnson’s current human ecological research focuses on political conflicts over marine and coastal resources and the uses of maps in decision-making. Her current social and spatial science research focuses on supporting sustainable and prosperous rural communities in a changing world. Centering on dignity as a guiding principle, her work focuses on best practices for resolving conflict and engaging diverse people in productive decision making. In service projects through the UMM GIS Service Center, Dr. Johnson and her students work with local towns, organizations and businesses to conserve Downeast Maine’s natural resources and plan for a prosperous and sustainable future. She has collaborated with installation artists and sculptors on community-based and place-based installation art projects.

Also a writer, Dr. Johnson’s award-winning book, Entanglements: The Intertwined Fates of Whales and Fishermen, was released in 2005. She was the marine reporter for the Martha’s Vineyard Times from 1998 to 2000. In addition to columns and feature articles for magazines and newspapers, she has published the Guide to Freshwater Animals without Backbones (with Arlene De Strulle; The Catskill Center, 1997). 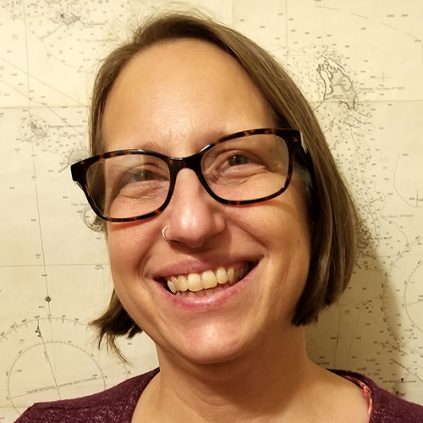